Kahuku, Hawaii– As the leaders of the Open Division assumed their positions on the 10th tee box of the George Fazio course this morning you could see their eagerness to begin the final round of the 2011 Turtle Bay Hawaii State Open. As their morning round began the sun heated the fairways and the competition…

Kahuku, Hawaii – Kamakani (Hawaiian for strong ocean winds) was the word of the day for many players in Round-2 of the Turtle Bay Hawaii State Open. Traditionally in the Hawaiian cultural, strong trade winds indicate a significant change…and that’s what players experienced this afternoon on Turtle Bay’s Championship Arnold Palmer and George Fazio golf… 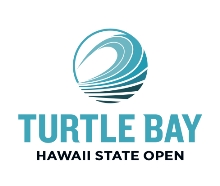 Leading the round in the Men’s Open division on the Championship Arnold Palmer course today was Alberta native Kent Fukushima (33 – 35) 68. Past Champion Kevin Hayashi is hot on Fukushima’s trail at (35-34) 69, along with Professionals Eric Dugas, Sean Meakawa, and Nick Sherwood.

This week the Fazio course will be hosting the Senior Open Division, Men’s A-Flight and Women’s Open Division.

Leading round one and a field of forty players in the Senior Open division is Professional Lance Taketa, who posted a strong (35-34) 69. Following Taketa’s shadow closely with a round one total of 72; Rick De Witt, Professional Mark Shimamura and Professional Leland Lindsay.

Allisen Corpuz leaped ahead in the Women’s Open field this morning with 5-birdies and an eagle on the 14th hole to post 5-under (67) for round one. Returning to defend her title Professional Katie Kempter finished today at (71), along with Professional Ayaka Kaneko; both 4-strokes behind Corpuz.

In the Men’s A-Flight, Reid Yamane shot 76 in the morning round and is sheltering a one stroke lead over Kimo Greene’s 77.

The 4th Annual Hawaii Golf Ho’olaule’a Awards will be held on Friday, January 13, 2012 at the Honolulu Country Club. Dinner begins at 6:00pm followed by an awards ceremony at 7:00pm.

Clyde Rego and Charles Barenaba, Jr. will be honored as the 2012 Hall of Fame Inductees during this year’s award ceremony.

Click here to register online or download a registration form and send it in! Deadline to register is Friday, January 6, 2012.

CHECK OUT the Ho’olaule’a Awards write up in the Star Advertiser thanks to Ann Miller.

To register for the Sony Open in Hawaii Pre-Qualifier, click here.

To register for the Sony Open in Hawaii Monday Qualifier, click here.